This week, I had the pleasure of seeing Peter Murphy play at the tiniest of San Francisco venues, Mezzanine.

As I stood on the floor listening to the pre-show DJ set, I had the realization that I first saw Peter play for his Holy Smoke tour, way back in 1992.

I've seen him play a number of times now, including on both Bauhaus tours. And this week's show was likely the best of the shows I've seen thus far (I am removing the first Bauhaus tour from the mix mind you because that was more like musical theater than a concert and would stomp all over just about everything else.)

Peter was relaxed, and happy, and clearly having a good time. It was a show full of old timers (even older timers than myself) and new fans alike, the latter wearing a fabulous array of leather and latex and more eyeliner than the man himself.

Throughout the show, Peter was talking to the crowd. Telling us stories about what he's been up to. Teasing us with the idea that he might move to the States. And introducing a number of new songs. One of my favorites was a song he introduced with these words "This is a song about letting go. Of drama. Of unhappiness. Not bearing it — letting it go."

I think we all have things we can–and should–let go. And it was lovely to dance and let the music and that feeling sweep over me.

I wasn't sure what to expect from the new material, in advance of the show. Much of the recent albums have had a significant world music influence, so I was probably expecting more along those lines. But instead, he hit us with some incredibly danceable and rocking tunes, similar in flavor to "Go Away White" from the Bauhaus reunion CD release.

That of course led me to the "what ifs." What if the band had managed to stay together after putting together such a lovely reunion album, and had toured? That state of mind was encouraged by Peter playing so many of his favorite Bauhaus songs, including one of my favorites, "Silent Hedges." that he also played my personal solo favorites "Subway" and "Disappearing" completely made my evening.

You know those shows where you can tell the performers don't want to leave the stage? That's the sort of experience Peter and his band gave us. He took a request from the crowd to play his cover of "Hurt. They came back for 3 encores. And they finally left the stage at 12:30 a.m. (on a weeknight! oy!) after an energetic rendition of the Stooges' "Raw Power." We love you too, Peter. Exactly what I needed.

I highly recommend you check him out if his tour is winding its way near you.

And P.S. Yes, those YouTube links are from the show I was at; I'd seen peeps recording in the audience so was not surprised to see them on there.

Every year, I sit down and start updating my Amazon wish list before the holidays, with the same thought circling in my head: “I don’t need anything, really. I don’t want anything.” And eventually, after an hour or so, I have a respectable list of things from Amazon plus items I’ve noticed in various other stores over the past few months, creating a respectable wish list.

It was due to creating my wish list that a couple of new compilations caught my eye.

I’d know the new Jesus and Mary Chain compilation was coming out, but I wasn’t paying much attention. Yes, they are my favorite band in the whole world. However, the “what releases of theirs do I not have list” at this point is down to two very limited edition seven-inches with gatefold sleeves that had postcards tucked into them.

I am not impressed with phrases like “rare b-sides.” I HAVE THEM ON 7″ and 12″ and CD! Ahem. But while perusing my decade-old JAMC google alert, I came across a review, that as it skipped through the inevitable paragraph about all the things to ooh and ahh over on the album, casually mentioned that this CD will include one of the new, unreleased songs they’ve been playing live in their reunion shows.
SOLD!

After adding that to my wish list, a new title popped onto my recommended for you selections: The Best of Depeche Mode Vol 1. I clicked through to view the play list, and cackled. That’s right. Not only did I cackle, I had to read out loud the song progression and inclusions. Why? Because there wasn’t any flow. Opening with Personal Jesus and closing with Never Let Me Down Again is totally fine, but the order of the songs seemed as well thought out as a toddler pushing a random button seven times and going with it.

Oh yes, it certainly shows the way the music evolved from the synth-pop days to the harder hitting Violator and beyond somewhat sleazy (in a good way) music I love from them. But it doesn’t work. You can’t segue from Personal Jesus to Just Can’t Get Enough to Everything Counts to Enjoy the Silence. Why couldn’t they have even followed a great set list? Oh wait that’s because they already did that with 101, the live album from the famed Rose Bowl shows. But when you can already get the 1-CD singles collection, or the 3-box set singles collection, and the 3-CD re-mix album that has my favorite mix ever on it, who is the audience for this album exactly? And how do they justify including some truly meh songs and not including Policy of Truth and World in my Eyes? Oh right, they’ll be on Vol 2, presumably. Blech.

A much better compilation bet? The Creation Records story CD that is coming out at the end of November as a partner to the documentary film about a truly amazing record label.

What’re you wishing for this holiday season?

Your cup overfloweth for stuff to do in SF this week…

Back in the day, I would crawl into class on Monday mornings, wishing I could curl up and go to sleep under my desk. No, it wasn’t just a case of the Mondays — it was post-120 Minutes sleep deprivation in action. That’s right — MTV used to actually have shows that collected MUSIC VIDEOS and played them back-to-back for hours! Shocking, I know. And these were from bands like The Smiths, The Cure, Depeche Mode, Peter Murphy, etc. Stuff you couldn’t really here outside of 91x in San Diego, KROQ in L.A. and Live105 in SF.

And now someone has collected a whole slew of 120 Minutes style video links from youtube and posted them here.

Enjoy! (and send me links for any JAMC you find on there)

One of my favorite events at each year’s Noise Pop music fesitval is the screening of a silent film at the Castro Theater with a live rock band performing the score. This year, they asked local indie rock favorites Oranger to reprise the score for Man with a Movie Camera, apparently originally created by Oranger for the L.A. Independent Film Festival. The movie was a collage of images from daily life in a Russian city, abstract but beautiful, and a great pairing for Oranger’s rockin out. AND there was even ample usage of theramin. 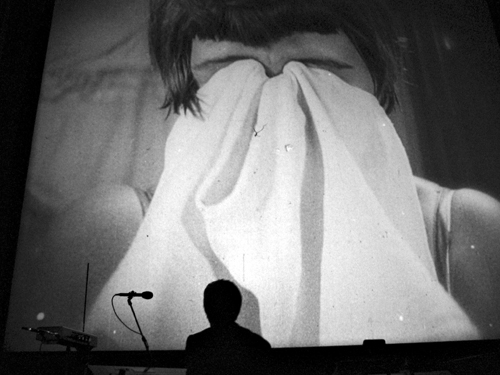 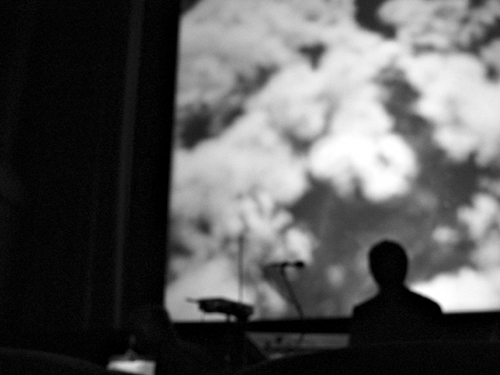 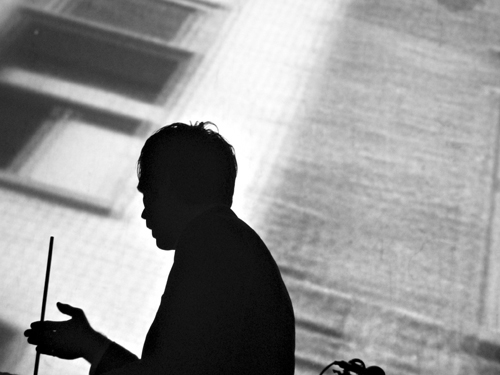 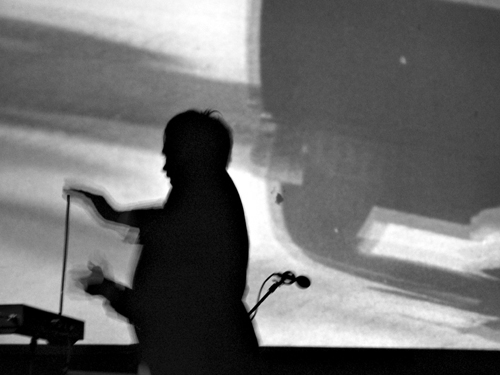 60% of the Hives turned out for a live interview on Live 105 during their Metreon broadcast on Saturday, December 11. Howlin Pelle was charming and exceptionally accommodating to fan requests to sign tickets, promo flats, t-shirts etc., and to pose for — and tae — dozens of photos. I had my white vinyl copy of Veni, Vidi, Visious signed byt he Hives in attendance, which leaves me wondering what I’ll need to do to obtain the other 2 signatures… Is a trip to Sweden in my future?

I get actively bummed out when I go to a show at a venue that doesn’t allow taking photos (like the Interpol show at the Warfield a few weeks back). After many a night spent at Great American Music Hall, and the cool Live 105 Studio Sessions at the Metreon, I’ve gotten used to taking photos while listening to loud live music.

I’ve made a few photo albums of my favorite recent show photos. have a look:

I hope for there to be more such photos here soon…